Avital Sheffer: Body of work
The Journal of Australian Ceramics, issue no. 48#1 2009
Written by Ann McMahon

An epiphany, a revelatory life changing moment in 1998 led Avital Sheffer to a life in ceramic practice. She was visiting family in Israel after migrating to Australia in 1990. Taking the opportunity to see Jerusalem’s Israel Museum, Sheffer was reacquainting herself with ancient artefacts held in the Shrine of the Book.

While contemplating the antiquity of pottery jars that held the Dead Sea Scrolls, it struck her that the ceramic medium was a carrier of transcendent power and portent. The vessels, discovered in caves at Qumran, held ancient knowledge that has significantly impacted contemporary thought and scholarship. Sheffer saw the jars as metaphors and realised the potential of ceramic material as an expressive medium.

She turned her attention to full time ceramic study at Lismore TAFE. The contemplative hour long drive from the verdant valleys of Mullumbimby through the rolling hills to Lismore set a rhythm for her life. Sheffer renewed her passion for making and enjoyed a new world of support from her teachers and peers. She had been similarly immersed in a stimulating and creative environment, while living in an alternative community in Israel’s Western Galilee.

An architectural sensibility is especially evident in Sheffer’s early ceramic works, which use devices such as cornices, pediments and vaulted domes. The rough, dry glazed surfaces are reminiscent of the rendered walls of ancient Middle Eastern settlements, which fascinate Sheffer. Enduring the ephemeral tides of human existence, buildings show the traces and contain the memories of generation after generation. Sheffer’s use of clay is similarly transcendent. This elemental medium enables her to reference the past, while reflecting on the present and imagining the future.

Under the Dome, a seminal 2004 exhibition featured architectonic forms. The show was mounted in collaboration with fellow Mullumbimby based artist Margaurite Josephson and was shown at the Tweed River Regional Art Gallery and Mura Clay Gallery Sydney. The exhibition was informed by a mutual interest in ancient cultures and a shared belief that artistic beauty is redemptive, capable of uplifting the human spirit and asserting timeless values.

While continuing these artistic preoccupations, a distinct shift is evident in Terra Intima, Sheffer’s 2008 solo exhibition shown by Beaver Galleries in Canberra and by Thomas R Riley in Cleveland, Ohio. The visual vocabulary relates to the human body. The necks, feet, hips and shoulders of the vessels invite anthropomorphic descriptions such as standing, squatting and full bellied. Temimah I is quite distinctive and anticipates the direction of Sheffer’s 2009 exhibition Terra Anima. Temimah I combines a phallic neck and head with the divided feet that suggest female labia and are a distinctive characteristic of this body of work. By referring to the human body Sheffer touches a deep intimate chord and elicits subliminal responses.

The technically accomplished and physically impressive hand built, coiled vessels surrounded the viewer at Beaver Galleries. They were placed on plinths at eye level or just below to maximise their impact. At around 60 – 80cm, the pieces do not relate to utility. Rather, they are the size of human infants. This scale carries an emotional imperative that operates on an instinctive level; it demands attention and captivates the senses.

Sheffer clothes each of her earthenware offspring in its own exquisitely cut and fitted garment, drawing on earlier work with textiles. Permeable borders of dots infer the possibility of exchange and recall the guiding marks of the tailor’s wheel. Sheffer skilfully adapts the techniques of the garment maker to joining the patterns and conforming flat screen printed transfers to the sensuously curved and proportioned clay bodies.

A collection of silk screens take up a section of Sheffers studio space. She has accumulated a library of designs developed from graphic fragments into repeat patterns. For her sources, Sheffer chooses diverse historical materials that offer insights into the development of western civilisation including, ceremonial textiles, rare books and ceramics.

The pattern displayed on Omphalus II is derived from a decorative border found in the Kennicott Bible. Held in the Bodleian Library at Oxford, this famously beautiful and lavishly decorated illuminated manuscript is hand written in the Sephardi script of Spain and dates from 1476. It testifies to the rich and influential Moorish culture of medieval Spain that foreshadowed the Renaissance. The elusive and compelling pattern defies attempts to determine its origin and date. This ambivalence invokes the derivative and evolving processes of culture and design. It also celebrates creativity and the fashioning of new hybrid forms.

Omphalus II is also an excellent example of the technical proficiency Sheffer has been able to achieve through experimentation and practice. The blue print paste she uses is especially unforgiving. Unlike oxide based recipes it stains the multiple fired dry glazed surfaces, allowing no room for error. Sheffer has carefully brought the pattern to the very edge of the distinctive medial line and horizontal reliefs that look like garment closures.

These symbolic leaf shapes iterate the concept of regeneration and growth. The seed is a recurring motif in this body of work, which is expressed in longitudinal division and bifurcation of the vessel bases. Meaning fertility, Piryon I & II resemble a couple dressed for a wedding ceremony. The birdlike patterns on the embellished panels reference ritual textiles from Brno in Bohemia. The texts are a prayer for rain and the story from Genesis about Abraham and Lot, their migration and separation.

Sheffer also reflects on the processes of inheritance. Not only genetic material and possessions are passed from generation to generation; culture, religion, stories and attitudes are also perpetuated in this way. Sheffer values education, scholarship and critical thinking as vital ingredients for positive personal ethics and for a moral and civil society. This conviction is explored in Almagest I, which features an important translation from The Great Book, a 2nd century treaty on astronomy and mathematics by Ptolemy of Alexandria.

Written in Judeo Arabic, the text was produced in Kalatayud, North Eastern Spain in 1475. Sheffer combines it with patterns developed from the decoration on a Persian bowl made in Kashan around 1200 and from an illuminated prayer book written in Lisbon in 1484. The swelling breast and vestigial arms of the vessel look stately and authoritative. Comparison to the slim shape of Tamuz I draws attention to Sheffer’s investigation of clay through the practice of making. She pushes the forms and surfaces through a series of permutations, exploring possibilities, while still adhering to a set of aesthetic and conceptual parameters.

An increasing use of blue in recent years is a response by Sheffer to the Australian landscape. The colour of the sea, the vast sky and a sense of space and distance created by blue eucalypt clothed mountains seep into one’s being. Sheffer’s surface designs in blue beautifully compliment the arid earthy palette that she chooses in recollection of the landscape and adobe buildings of Israel. Of course, blue surface design features in ceramic traditions that emerged from the Middle East and spread through the Mediterranean region to Europe.

This geographical pathway mirrors the spread of learning and culture, which is the focus of Sheffer’s research. She acknowledges the importance of writing and scholarship by incorporating text into her artwork. Sheffer is fascinated by the evolution of hieroglyphs and cuneiforms written in clay through proto-sinaitic scripts to modern alphabetic text.

Written in Judeo Arabic on the surface of Omphallus II is an engagement deed from an archive at Nah-Amon (Alexandria) Egypt. Dating from 1835, this Hebrew document is written in Arabic script, which was the lingua franca of the region at the time. Such examples are of particular interest to Sheffer as they reveal shared histories and cultural ties between the politically divided peoples of the Middle East.

The region’s history of conflict is of great concern to Sheffer. She aligns herself with the peace movement and her most fervent desire is for peace. She maintains that coexistence is possible, and recalls her life in Galilee where she enjoyed the friendship of the people in neighbouring Arab communities. Through her artwork Sheffer explores the common ground of interwoven histories. She holds hope for the future in her gracefully proportioned containers. Their extraordinary beauty and exquisite detail invites a state of quiet yet engaged contemplation. 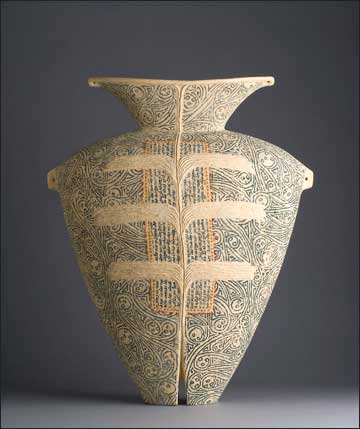 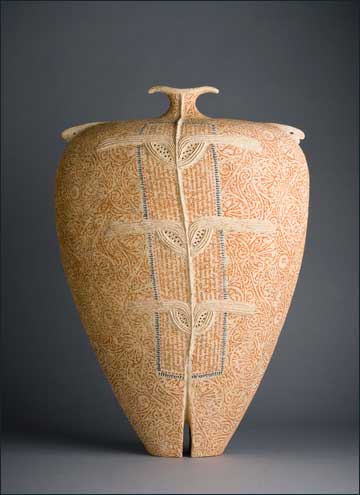 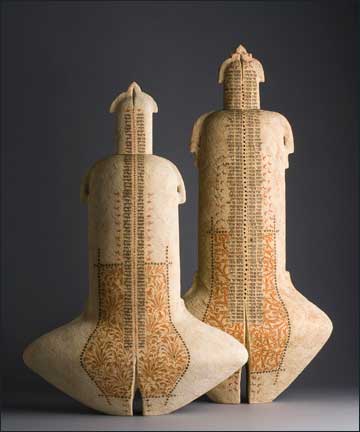 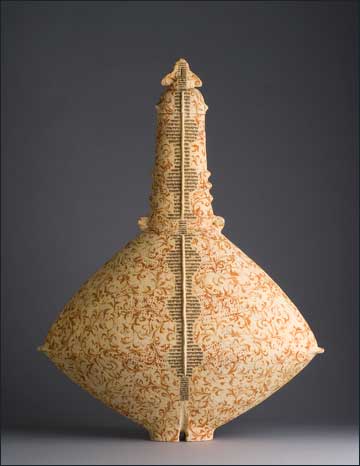