Avital Sheffer’s ceramics have a disquieting presence. The vessels are large, standing solid and stolid, the height of a toddler, with the gravitas of a small child. Elevated on plinths they meet your gaze, adorned with texts relating ancient histories as complex and interrelated as natural systems. They confront, especially when grouped together, with a solidarity informed by their heritage. These vessels are anthromorphic – my nine-year-old daughter authoritatively claimed some as female, others as male – she read the gender for each vessel imbued in its presence, its form and in some other, less easily identified, ambient emotional expression.

It is this latter quality - an ambiguous emotional connection, which defies the solid physical presence and cerebral resonance of each vessel - which has developed so strongly in Avital Sheffer’s ceramics during a relatively short period. The many threads of her past come together with the force of a vocation found late.

Sheffer’s ceramics draw on her genetic heritage as a Jewish woman born in Tel Aviv, Israel. Her family was part of the diaspora of more than two millennia, and, in their return to Israel, Sheffer suggested, they were “old wares in a familiar place. In our flesh we remembered the Canaanite, the Greek, the Roman. The earth was a constant reminder - our story enmeshed with those of others.”

Like the country she left, where ancient shards of glass, ceramic and marble are layered into the soil, Sheffer wears her history of archaeology and languages within her and this sense of its sources resonates in her creative work.

When she was young, Sheffer left home to live in a village in the Galilee, near the northern border. She identifies as a secular Jew and as a person of the Middle East; her associations and sympathies lie with the peace movement. Her curiosity about the archaeological wealth immediately beneath her feet and outside her country’s border was present early. “I love digging, finding things – the fragments of metal, shards of clay, stone, time-patinated glass – they all spoke to me. I could hear stories and secrets beyond their indifference. I am intrigued by other traditions and their inherent dilemmas, especially those that are familiar yet different. And I’m acutely aware of the relevance those histories have to contemporary affairs.”

Later Sheffer and her family established an alternative village in the Western Galilee: one without fences (a rare phenomenon in security-conscious Israel). They had strong connections with neighbouring communities, and here she experienced traditional farming and craft-making practices. She worked with textiles and was trained as a classical homeopath before emigrating to Australia in the 1990s.

They lived initially in Sydney, before moving to Mullumbimby to embrace the environment of the new country. She related, “I had this painful but exhilarating ignorance. I had to start learning the language of place, the flora and the fauna, the collective memory of Australia, one of which I knew I could never be fully part. I planted trees to throw new roots into the ground. I was painfully aware of my otherness. I went from being well-planted in a place and in a language, where history connects me right into the ground, to knowing nothing. In that inherently uncomfortable process I found an awakening, an opportunity for renewal.”

The solemnity imbued in Sheffer’s vessels is a direct result of their initial inspiration and the cultural transference in which she found herself. On a visit to Israel in 1996 she went to see the Dead Sea Scrolls, and noticed, as if for the first time, the containers in which they were found. It was, for Sheffer, a serendipitous moment, “like falling in love”, when she knew instantly that she was to work with clay.

The painstakingly physical construction of her vessels evokes the ancient tradition of coil pots, the earthy and porous tactility of the finished dry glaze harks to the sun-bleached earth of her heritage but also exhibits a distinctly Australian resonance. Then the vessels are imprinted with inscriptions sourced from libraries and museums all over the world. Jewish manuscripts, often in Sheffer’s native Hebrew language, are researched, restored and then transcribed onto screens which she collects in a visual archive. After the printing the ceramics are fired again, embedding the text permanently into the skin of the work.

The inscriptions are strong points of connection, where Sheffer follows the hand of a calligrapher some one or two thousand years before her, in her own language, still spoken today. These texts represent an exchange of knowledge, communication and sharing across the centuries and continents. “They feel as fresh as today. Everything to do with human experience and emotion and thoughts is there.”

Yet they also describe shared origins of clashing cultures, narratives which connect warring civilizations, basic human exchanges transcending territorial disagreements, and cooperation, with exchanges of knowledge across cultures and nationalities.

Ancient vessel forms, including fertility figures from times well before these texts, have informed Sheffer’s recent work, where the solidity of the ceramic form is disrupted by a split at the base, creating a shape with a moving aesthetic and physical vulnerability. This gives the work a humanity which is grounding and metaphysical, evoking primal instincts and, simultaneously makes an abstract reference to ancient female votive figures, which stand like sentinels on the verge of our consciousness. Omphalus IV incorporates a sinuous central divide, a line elevated like a cicatrice to evoke the shimmy of a belly down the centre of the vessel. The script on this vessel relates to an engagement deed from Nah-Amon from Alexandria, Egypt, from 1833, with scroll designs developed from a prayer book from 15th century Lisbon in Portugal. Temimah II has tiny handles which emerge like nipples from the memory of the clay itself. Igeret, from 2007, has greater formality alluding to the meaning of its title - a letter – found in a repository where Jewish ritual objects, sacred books, personal and community documents no longer in use are put aside and buried.

Clay, like our bodies, has molecular memory, so these pots often revert to their earliest sculptured incarnations in the kiln. This adds to the technical difficulties in the symmetry of the large oval form which Sheffer applies less than strictly, allowing natural variance. There is implied respect from any ceramicist for the weather, the earth, and the fire in the kiln; in the process of making, the elements may also destroy the most painstakingly created pots.

Sheffer splices the physical clay with texts which celebrate the cerebral. For her, this work is about “the urgency of connecting stories without flattening their layers”. The texts expose cultural complexities, with Islamic designs arrayed on one side of Igeret and Jewish script on the other, like a yin yang pattern which shifts the balance around the perimeter of the experience. Penimah IV, from 2008, illuminates the shards of multiple histories embedded in Sheffer’s aesthetic. Penimah means inside (in the female form), and the script is drawn from the Xanten bible created in Germany in 1294. The tattoo-like dotted line is developed from a wall tile at the Dome of the Rock in Jerusalem (arguably the most contested place in the world given its history and importance to both Jewish and Muslim faiths). The form of the pot is unambiguously contemporary, the main body like an upward-facing arrow. A punctured core draws the eye back to the centre line which traces from the fluted top to the small split at the base (a mousehole no less significant for its understatement).
In comparison Adamah I is a simpler lidded shape, given all over decorative treatment with architectural motifs from a 19th century woodcut. Adamah is the Hebrew word for earth, with resonances to Adam and dam (person/blood), and its aesthetic evokes the irresistible lure of place to culture.

Sheffer describes elements of her work as a “clash of religions and cultures, like the love-hate relationship that we have with the other but also with ourselves because we are mixed too”.
The work is created within the realization that the dissolution of her personal global centre is complete. “My world has grown bigger. That awareness allows me to approach the culture of my place of birth with its thick history to develop a new perspective.”

The fact that Sheffer, now as much from Australia as from elsewhere, creates contemporary monuments to history and memory in her studio in the lush environment of northern New South Wales, makes the point that cultural transformation is meaningful everywhere. The work utilizes the past and unites traditions in a way which seems impossible in the light of current events in the Middle East. Their eloquence makes for intriguing speculation.

It is not for the sun to overtake the moon
nor doth the night outstrip the day.
They float each other in an orbit. 2

1) Louis Nowra, “The Forum: On the Ever Present Past”, The Weekend Australian, January 3-4, 2009.
2) Quoted in Lost History: The Enduring Legacy of Muslim Scientists, Thinkers, and Artists by Michael Hamilton Morgan, National Geographic, Washington, 2007: p.117. 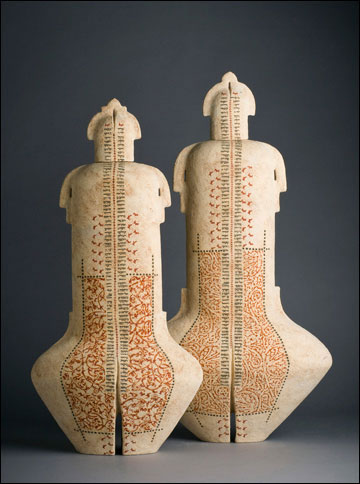 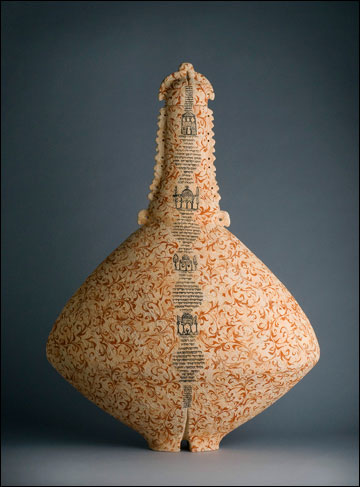 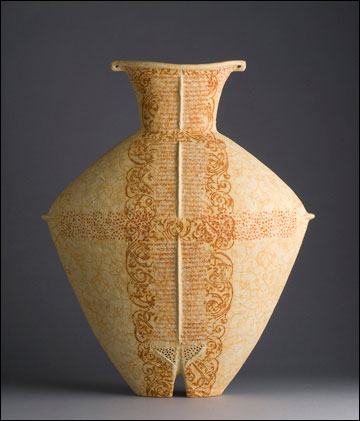 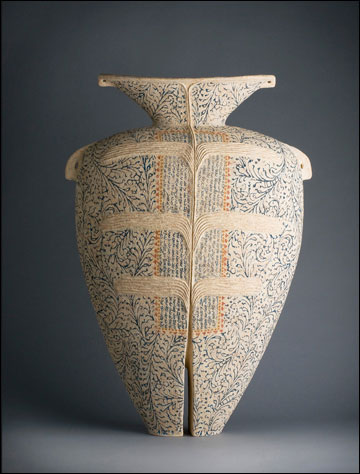 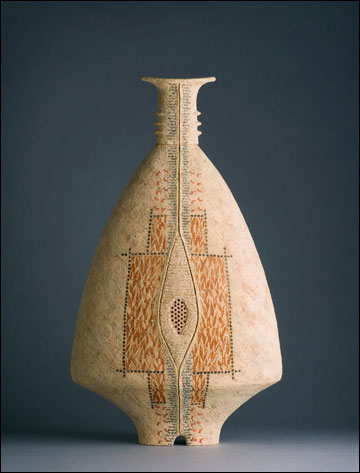