Nestled in the hills behind Mullumbimby in Northern NSW are two artists making vessels and sculpture that acknowledge and celebrate ancient traditions. The ceramics of Avital Sheffer and Margaurite Josephson connect viewers directly to ancient and Middle Eastern culture through references to architecture, text, sacred symbols and calligraphy. By using surface techniques they have developed, they have created forms that have archaeological resonance: new works with an ancient feel.

The territory to which they refer is historically loaded. Few geographical areas of the planet have produced as much influence as the Middle East. Judaism, Christianity and Islam have had tremendous effects on the spread of language, art, music and other forms of cultural practice. Few places have experienced as much dispute, or as much fierce doctrinaire argument as the holy land. The irony of two artists half a world away from the Middle East using its symbols, shapes and visual flavour is not lost on Sheffer and Josephson. They both believe that distance allows for a perspective not possible closer to the whirlpool.

Sheffer and Josephson have many similarities. They live across a rainforest valley from each other and share enthusiasms for ceramics, books, and glaze research. They both draw on references that are Middle Eastern and both have respect for antiquity. One important shared value that underlies the creative urges for both artists is belief that artistic beauty can be used as a tool to redeem humanity and assert timeless values.

After migrating to Australia from Israel, Sheffer turned to making ceramics. She had a revelatory experience in Israel’s National Museum while viewing the containers that held the Dead Sea Scrolls. Sacred vessels have had a significant heritage in the Middle Eastern imagination. They have held genies, secret spices and most importantly sacred texts. For her, these simple, profound capsules held a magic radiance. That soft clay could become immortal archaeology and contain the sacred, the fragile and the secret transpired her. This experience initiated a passion to make ceramic that would keep a reference to ancient Middle Eastern tradition and articulate a visual character that has flowered in Hebrew as well as Assyrian, Canaanite and Arab cultures.

There are many spice bottles in her recent production and they are amongst her most compelling works. Special containers for holding and smelling aromatic herbs and scents have a long history in the Middle East and their ritual use symbolises the convergence of the sacred and the mundane. Religious references and spirituality are evoked by smells; the invisible is conjured by the senses.

Tradition is used by Sheffer as a departure point for her work. The spice bottle form is a graceful vertical, usually capped by at least one but sometimes a trio of domes. Their shape is also architectural and some even hold the essential proportion of a human figure. Clusters of holes punctuate the forms to allow for the passage of air and light. While the forms of Shaffer's spice bottles reflect traditional shape and function there is also something speculative and new about her work. Aspects of ancient texts and symbols have been screen printed on the ceramic surfaces. The decoration of the bottles creates an intricate, busy graphic style. The symbols come from a range of ancient Middle Eastern cultures and their combination creates a surprising harmony of marks.

One of the spice bottles is titled Kohelet and refers to the book of Ecclesiastes. On the side of another vessel a blessing has been printed inviting the reader to live a conscious life that manifests virtue. Other texts and symbols have been carefully arranged to produce meaningful decoration while a chevron wheat wheat-shaped motif is raised in relief on the front of the form.

Margaurite Josephson spent five years in Northern India and Afghanistan studying classical Indian music and collecting jewellery. She has an instinctive empathy with art that has a Middle Eastern flavour; her ancestry came from Spain where Moorish occupation left an indelible presence. Sharing many stylistic preferences with Sheffer, she believes arts essential role is to elevate the spirit and magnify beauty. She cultivates her passion for architecture with rare books and travel. The architecture of Morocco, Northern Africa and India has particular fascination for her.

While denying a role for social commentary in her work Josephson’s creative method often starts with an issue that is politically challenging such as the images of looting in the Baghdad Museum after the fall of Saddam Hussein. Like many others, she was alarmed by the theft and dispersal of much of the collection. Her response was to make a piece that celebrated Arabic cultural heritage to remind us that post 9/11 stereotypes have limited validity.

Quandusi is an architectural sculpture reflecting the style of the Maghreb people of Northern Africa. It has three storeys and a scalloped roof. Small arched, wooden doors have been inserted in its walls. It was inspired by the vast legacy of mud brick dwellings in the Middle East and North Africa. Elegant scrawls arc across the vaulted surface of this piece. The calligraphy was inspired by the poems of Al Quandasi, an 18th century Moroccan scholar and poet. The calligraphic tradition in this region encouraged a degree of improvisation in style and this is also evident in the looseness of mark making in this piece. Josephson’s use of script is not a literal copy of an original. Like Sheffer, she uses the archaic as a departure point for her own ideograms. The script on Quandasi has no reference to literal meaning but it honours the style, spirit and heritage of the original.

Around the necks of many Kutchi women in Afghanistan are worn prayer holders; intricately decorated pieces of jewellery that hold a written prayer. Relic is a huge prayer holder, almost one metre high. It is a large mandala like form, heavily ornate, its cracks and surfacing giving it the appearance of something old and sacred. Relic has an almost intimidating physical presence that is impossible to ignore. The work amplifies the aspirations of millions of women and celebrates the style and integrity of people too often stereotyped in the West.

Why are two artists living in the forests of Northern NSW giving voice to cultures that are half a planet away geographically? Avital Sheffer and Marguerite Josephson have distilled volatile territory to produce ceramics that connect directly to antiquity. They compel us to celebrate the common roots of these great Middle Eastern cultures and to acknowledge their complexity. Their work represents a conversation with their ancestor’s voices from new vessels. 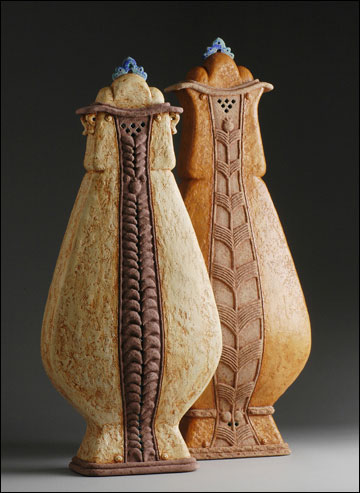 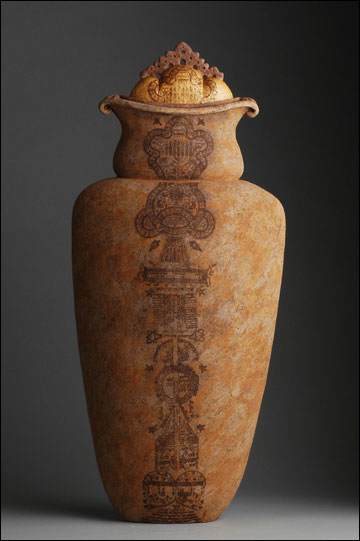