The ceramics of Avital Sheffer speak of ancient civilisations but their idiosyncratic forms and refined surfaces place them firmly in the world of contemporary studio ceramics.

These earthenware vessels are an amalgam of culture and history. From the curve of an amphora to the classical Islamic dome, each piece has its own footing in the legacies of the Middle East.
I find Sheffer's work enigmatic, yet strangely familiar as it evokes the textures of desert cities and dusty soaks, ornate Moorish palaces and ancient scribes.

This is no accident, for both the forms and their delicate decoration are drawn from the artists passionate research into ancient Middle Eastern ceramics, metal, glass perfume bottles, spice jars, textiles and illuminated Hebrew manuscripts.

I first saw Sheffer's work at Beaver galleries in Canberra in 2005. In the intervening time she has begun to attract attention in the US and will show in London this year.

This work was part of her second solo show at the Salmon Gallery in Sydney and is a fine survey of the breadth of her technique and the deepening exploration of culture that is captured in the forms and surfaces of her work.

Sheffer describes her work as an exploration of the gains and losses between traditional and modern life. To understand the modernity in these seemingly ancient pieces is to explore the artist’s passion a little further.

She was born in Israel, but has always been aware of the burdens and misnomers of history. Wars may have redrawn national borders, but digging in the earth and meeting the remnants of past civilisations, has given Sheffer a stronger sense of her identity as a person of the Middle East.

Her ceramic practice began after she saw the vessels that held the Dead Sea Scrolls. They moved her so intensely that she left her profession as a classical homeopath and began training in ceramics in Lismore. She now works from her studio in the hills behind the northern NSW town of Mullumbimby.

Her vessels are intriguing – initially moulded and then hand formed they range from the architectural to round-bellied, androgynous to empirical, suggesting anthropomorphic that may resemble an armoured warrior, or a heavily decorated yet veiled Bedouin bride.

The surfaces of her work are then scarred and printed with pieces of text, textile patterns and floral motifs. For the more decorated pieces, such as Ostraca III and IV another layer is added to the decorative language when the central text is interspersed with fine grids holding touches of turquoise glaze.

It is the juxtaposition and groupings that allude to the diversity if cultures and peoples from this part of there world. In Setarim III and IV the long urns with fluted tops are anchored in the Hebrew tradition, the trails of text lead us down to the scarred curves that suggest the Jewish candelabra or menorah.

In Aspaklaria II the handles sit like a rounded shoulder at the top of the vessel, while the scarification creates an illusion of fingers resting on a rounded waist. Here is the clear division between sides, the intricate text on one side of the scarred centre line, an unfurling floral motif on the other; a dance between masculine intellect and expressive feminine.

Aspaklaria means mirrored image in Aramaic, and this piece reminds me of the Persian marriage where the couple sit in front of the mirror to view not only who they are as individuals but what they become in this union.

In contrast Peregrinations II draws on elements of classical architecture, its handles are elongated and elegant, separated from the vessel by narrow slits that keep the eye close to the ochre coloured patterns that speak of African textiles.

There is a danger with this type of work that it becomes repetitive, a conversation that moves little. But in this show Sheffer introduces us to the possibilities in this practice with an array of new forms and an exciting and rich cache of decorative finishes. 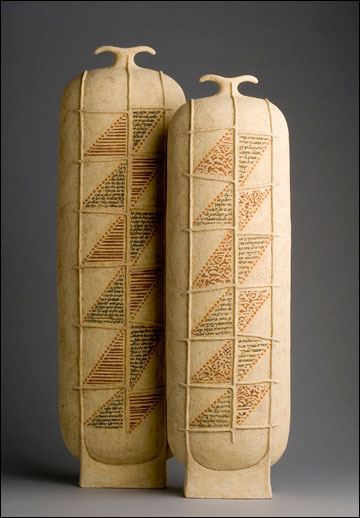