Tradition to Modernity
Avital Sheffer investigates her Middle Eastern and Jewish heritage and transformations in cultural identity in the process of uprooting and transplanting oneself in a new land.
Craft Arts International No. 64, 2005 pp. 37-41
Text by Gordon Foulds.
Photography by David Young.

When looking at photographs of the works of Avital Sheffer, one must be impressed by their power, their beauty and their originality, but when actually seeing them, they have a compelling presence and quality of Middle Eastern timelessness about them, which a photograph does not convey. When Australians visit the major European galleries and actually see works that they have only previously known through photographs in books, they will often say that the painting or sculpture exudes an almost mystical aura which is only felt when viewing the actual work. A similar sort of effect is evident in the ceramics of Avital Sheffer, who was born in Tel Aviv, Israel and has been living in Australia since 1990.

Although Israel is now an ultra-modern country, she describes the Middle East culture as being layered and involved, the cradle of Judaism, Christianity and Islam; a vast melting pot of races, made up of Jewish, Greek, Roman, Persian, Assyrian, Canaanite and Arab cultures. “That’s the way it’s been since ancient times,” Sheffer says, “but they are all drinking from the same brook.”

Many of their languages and local dialects go back to the same shared roots. This embracing view of her Middle Eastern culture is reflected in all that Sheffer does. She practiced architecture, town planning and landscape design in an artists community called Clil in Western Galilee where she and its other residents experienced a traditional lifestyle of farming and animal husbandry. Although being part of Israel, Clil maintains a healthy and neighbourly relationship with the surrounding Arab villages. It sits on ancient ruins, “like everywhere in Israel,” she says, and below their community were the shards of earlier times and communities. She responded to the old and crumbling architecture that had housed families for countless generations, because these also embody and inspire the living culture of today. This too is reflected in Shaffer's work.

Given her previous experience, it is not surprising that much of Sheffer’s work is architectonic. Some aspects of her ceramics reflect parts of the landscape, the buildings, the walls and the timelessness of the centuries. Her surfaces have the dry pitted look of ancient buildings with their crumbling walls and powerful suggestion of a culture very different from the Australian one. They are not smooth; her glazes are dry looking with totally matte finishes except for the smaller pieces for which she uses terra sigillata. Her architectural experience is evident in her overall ceramic design, with many of the pieces suggesting some earlier Eastern form of habitation. Many of the works could be described as non-functional lidded jars; the lids, however, Sheffer describes as ‘domes’, and when seen in groups, the clustered domes take on the mystical quality of a Middle Eastern village as if seen from afar. This is apparent in Group of Vessels III. Domes are n integral part of the old Middle Eastern landscape, and may symbolise many things including shelter, places of worship or hiding, and also some form of dominance and suppression, She makes her domes from terra sigillata which gives them a smooth sheen, in contrast to the bodies of these works.

Many of Sheffer's works celebrate Middle Eastern design elements and traditions. In older civilisations, clay jars and pots were used for storing all manner of things, not only food, wine and water but also valuable and precious things, such as documents, religious scrolls and important family possessions. Much of her work is redolent of these things. This also applies to her decoration, which combines both Jewish and Islamic folk art and motifs taken from ancient artefacts. The Hebrew word Shefah (meaning abundance) is inscribed on one side of a pot, parts of the Book of Wisdom stripped of politics and organisational structure, while on the other side of the pot is an ancient Islamic folk design, showing that the two cultures, which have so much in common, really can live happily and harmoniously together. Staf Em (meaning mother tongue) combines on one side, words from an actual marriage certificate written in Hebrew, and designs from ancient Jewish amulets, combined with old Islamic designs on the other. Amulets were ancient charms, worn to ward off evil, and were highly decorative and beautiful. In past centuries, many of the things both used and worn in peoples’ daily lives were decorated with traditional patterns and designs. Even the most mundane objects were celebrated in this way. Art was found everywhere in the old traditional life-style. Sheffer says that in terms of art in our daily lives, that is life in the 20th and 21st centuries, our philosophy of art functions in a different way. We tend to hang it on our walls and we see it in exhibitions. We separate it from, rather than integrate it into, our daily lives. ‘One of the injustices of embracing modernity has been that we have thrown the baby out with the bath water.’

Mistor meaning hiding place, combines prints with stylised cabalistic texts, and the pot’s form suggests that it could be the hiding place for ancient texts and scrolls, and by extension, becomes a hiding place for knowledge and all that implies. When knowledge is withheld, people remain in ignorance of that knowledge. The Onomasticon series tells of the Book of Places, the places where major events have occurred as well as the small quiet places, where over the centuries, history has been written and re-written many times. The Book of Places anchors those events very firmly in specific lands and places. It becomes quickly evident that although Sheffer is Jewish, she is also proudly and consciously Middle Eastern, and has spent her life ideologically aligned with the Peace Movement, and through her philosophy of combining the Israeli and the Islamic cultures, she can at least create peace on the surface of her ceramics. The political statement is there. Her love and understanding of the Middle East is a most important aspect of this artist’s psyche.

Her colours tend to be desert colours, the colours of an arid landscape. She works mostly with pale lemony ochres and rusts, and to a lesser extent, blues, and says that changes in the weather in her homeland are extreme. The landscape is green in winter and spring but is dry and yellow for autumn and summer, for half the year. The weather cycles produce long, hot summers and this is reflected in the colours of the buildings. She is very aware that while these old buildings represent the past, they also represent both the present time and the future. And that may be said about us all. Wherever we are, we’re only the current custodians. The clay she works with reminds her of her roots; the pots she makes also remind her of her roots as they combine the primal materials of clay, fire, water and time, and from these a new and beautiful object is given form.

Her curriculum vitae grows annually more interesting. She has exhibited in her local area, Northern NSW, and has already exhibited in both Brisbane and Sydney. Her life in Australia is very different from the life she formerly lived. It allows her the freedom to become involved in the local culture, but also to resolve the dilemmas of adapting to a new culture and a new language. While her work remains powerfully rooted in the Middle East, it will be interesting to see what changes her current lifestyle might produce over the forthcoming years. She may regard it as just another small stopping point on a very long and historic continuum. And perhaps the objects that artists are making now and the items we use in our daily lives may provide shards and antiquities for distant future civilisations to excavate and wonder at. 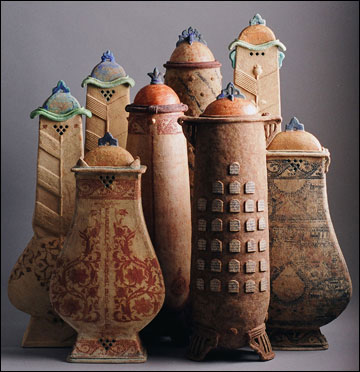